It's 1st September now and we have reached Darwin.  The blog is 2 months behind but we hopefully will try and catch up a bit while we are here for a week.

While staying at Point Quobba we were advised to make a booking to be able to stay at one of the camp grounds in the Cape Range National Park near Exmouth as it is very difficult to get in if you just turn up. Sometimes people queue up for 3 days waiting for a site to become available. We returned to Canarvon to stock up on supplies and do washing and while there we were able to book 1 night at Tulki Beach campsite in Cape Range.  As it was 5 days away, we took our time getting there. The distance was only 370 kms. Very slow going. 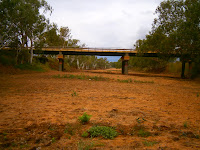 Driving through this part of the country we crossed over many rivers which were completely dry. and will probably stay like this until the next cyclone comes through.

On the way to Exmouth we did a side trip to Coral Bay for the day which is situated just north of the Tropic of Capricorn. It is one of the most picturesque seaside towns in Western Australia and it is the southern gateway to Ningaloo Marine Park which is Australia's largest fringing coral reef, spanning 300 kms from Point Quobba to Exmouth. 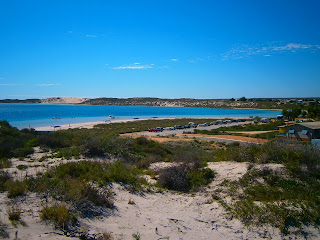 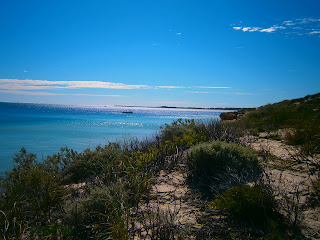 We arrived into Coral Bay early in the morning and found a nice parking area overlooking the sea where we had our breakfast. This is a very attractive seaside town so it was unfortunate the morning started off very windy and cold, blowing sand and dust everywhere, even though there was a sunny blue sky. People were wearing fleecy pants and jumpers. We certainly didn't feel like swimming. We were surprised how small the township was, with just 2 large and very fully booked caravan parks, some hotels/motels, and a few houses and shops and beautiful white sandy beaches.

As we planned to do snorkelling here we bought a waterproof cover for our camera in order to take underwater photos. When the weather had improved we snorkelled in the beautiful clear warm water viewing the underwater coral gardens with many coloured tropical fish swimming in and around the coral. Because of the warm water we were able to stay out for quite some time without wearing a wet suit. 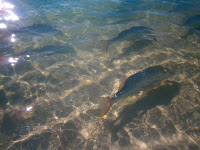 Around 3.30pm every day schools of snapper come right into shore to be fed.

Many cruise tour groups leave from Coral Bay taking people out on glass bottom boats to view the coral and fishing charters and to snorkel and swim with the whale sharks. This is a very popular tourist destination and the population swells between April to October.

After spending the day in Coral Bay we continued north towards Exmouth and Cape Range National Park stopping to view a termite mound. These are scattered everywhere around the countryside. We picked up a little bit of information about them which we found very interesting. 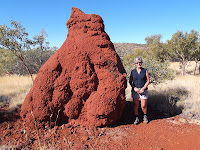 Termite mounds - Each mound is an entire kingdom, complete with a king, queen, soldiers, workers and thriving cities. Millions of termites may live in a single mound and each termite has a role of its own in maintaining their complex social environment e.g. worker termites (smallest) build the mound using dirt and saliva. They have no eyes or ears but work by smell. They make tunnels to help keep the mound cool. These mounds can last up to 100 years. The King and Queen have their own room and the soldier termites keep quard outside their door. The King and Queen can live up to 30 years. (This was on an information board explaining all about the termite mounds. We didn't make this up). 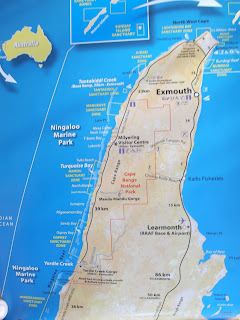 Arriving into Exmouth the first thing we noticed was the new marina with some expensive looking houses being built in steel (cyclone and termite proof). Exmouth is situated on the North West cape of Western Australia. It is a flat, laid back town with a population of 2,500, which also swells in peak season April to October. Caravans, motorhomes, vans and 4WDs are everywhere you look. It has year round perfect weather, winter temps in the mid to high 20's, with no wet season although it does sometimes get hit by cyclones. There is a nice shopping centre equipped with everything you need, plus really nice fish n chips. The laundrette is huge and extremely busy.

At the visitors centre there is plenty of water so there was a constant flow of caravans/motorhomes etc coming in to fill up as there isn't any water available for those going into Cape Range National Park.

We stocked up with food and water and drove the 60kms around the top and to the other side of the peninsular to Cape Range National Park, where we had booked in to for 1 night at Tulki Beach. That was all that was available at that time. We just needed to get in to the park. There is a sealed road, thank goodness, all the way into the National Park and a 4WD dirt road access coming to it from the south. Within the park are 8 sandy campgrounds spaced out down the coast, with the amount of sites ranging from 7 to 20. No facilities except toilets. The maximum stay is 28 days. This rule was applied due to numerous amounts of people coming up from down south during the winter and staying for months at a time. This meant a lot of people couldn't get in. Volunteer camp hosts oversee each campground.

﻿﻿
We weren't sure if we were able to stay any more than the 1 night we had booked when we arrived but by the next morning the camp host had found another spot for us at the Lakeside Beach camp ground so we moved there the next day. There were only 7 sites at this campground and as everyone got on so well together no one moved out for a while. We stayed there 10 days. Our neighbours had to go as their 28 days were up. They were pleading with the camp hosts to stay longer but they had to move on. At 4.30 every afternoon we had 'happy hour' together, organised by the camp hosts, and almost everyone came to it. We usually stayed until the sun set and it became dark. All these little things help to make the stay there enjoyable.

While there we visited two deep gorges in the National Park, Mandu Mandu Gorge and Yardie Creek. We were able to kayak up Yardie Creek and saw the rock wallabies sitting up in the cliffs.

﻿﻿﻿﻿
﻿﻿﻿﻿Our main enjoyment was the snorkelling which could be done at a number of the beaches up the coast. Turquoise Bay was beautiful with the sea the colour as it's name. Lakeside, where we were staying, had an area right off the beach to snorkel at, so that was really handy.
﻿﻿
There was plenty of coral and tropical fish to view, even a small stingray and a turtle. Some people told us they saw dugongs but we seemed to miss them. Having the water break 400-500 meters from the shore leaves a wonderful calm area to swim and snorkel, but only when the wind wasn't blowing. Unfortunately there were days especially the mornings when the wind made it unpleasant. It always calmed down in the afternoon so we were able to take the kayak out. While out paddling around looking for dugons on the clear water we noticed a splash up ahead, which we thought might have been a turtle. We raced towards it, only to be surprised when a shark appeared in front of us and swam to the side. We were stunned and Nigel told Carol not to move. We stayed still until we were sure it had moved away. It was probably as startled as we were. We weren't sure what type of shark it was. It seemed quite big, browny grey, about 5-6 ft. Hearing another splash behind us and seeing a swirl of water we thought it was time to head back to shore. We certainly had a story to tell when we got back for 'happy hour'.

While we had a great time there a couple of things happened. Nigel lost his snorkel and mask and the camera packed up from using it in the underwater waterproof cover. Maybe moisture? Never again. Lesson learnt.

As we needed to fill up with supplies we travelled the 60kms back into Exmouth for a day. This just happened to be Janine's birthday, so we were able to talk to her. There wasn't any TV, mobile or computer coverage where we were staying so we had to catch up on emails and phone calls while there

The Ningaloo Reef which borders the National Park is well known for swimming with the whale sharks, the world's biggest fish. Every day 3-4 tour boats were out just beyond the reef full with people wanting to do this. Spotter planes were circling above relaying messages to the boats just where the sharks were. It is extremely popular and people come from all around the world to do this. The whale sharks are in the are just after coral spawning from April to July. The Ningaloo Reef is one of the only places they appear regularly in large numbers.

Nigel thought about doing it to celebrate his turning 60 but couldn't justify the cost at this time. Maybe we will do it together another time.

We enjoyed our time immensely while in Cape Range National Park. We would have loved to have stayed longer but we had to keep moving on. We know we will be back again sometime in the future.

Our next blog will be the Pilbara are, including Karirjini National Park and Tom Price